As I mentioned, the instrument was played horizontally, on the lap.

Since the strings faced upward, the sound was projected toward the ceiling rather than outward toward the audience.

Something had to be done, because the music venues and the audience kept getting larger and larger.

So what would you do?

Find a way to amplify the sound? 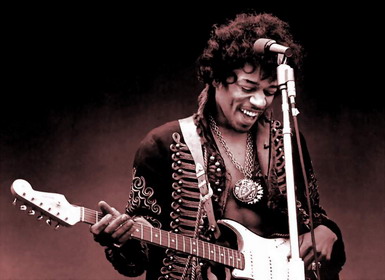 Yes. And to do that, inventors started attaching electronic devices, electrical coils to the acoustic guitars.

And the electronics worked!

But attaching electronics didn't just affect how loudly you could play, it also changed the quality of the sound.

These early electric guitars were hollow and these early amplifiers caused vibrations in the bodies of the instruments.

So as the sound got louder, it became more distorted, fuzzy-sounding.

And what musicians at the time wanted was a pure, clean sound.

So where does Les Paul fit in?

Wasn't he the first to electrify acoustic guitars?

Uh... no. Electrified guitars already existed by the time Les Paul came into the picture around 1940.

What Paul did was experiment with ways of removing the distortions and he succeeded.

He designed a guitar with a solid body that relied solely on electronics.

Paul's solid body eliminated the vibrations, and thus the distortions.

Excuse me, but when I think of electric guitar music, I think of Jimi Hendrix.

Jimi Hendrix, one of my favorites.

But Hendrix's style really was all about distortion, that's what's so great about his music, all those special effects.

I think a lot of rock 'n' roll fans prefer that to a pure sound.

Yeah. You are getting ahead of me here. But good, because the point I was going to make is that the sound of rock 'n' roll changed over the years.

And the designs and technology of electric guitars made those changes possible.

So whereas Les Paul's goal was to remove the distortion, later musicians wanted to produce it.

And by the time Jimi Hendrix came around, well, essentially, Hendrix reinvented the electric guitar, in the sense that he created amazing effects and vibrations that changed the sound of rock and roll completely.

So eventually, people tried to improve on Les Paul's model, well, to modify it I should say.