Obviously this meant that we had to rethink our previous notions about when bananas first arrived in Africa.

But, well, this discovery had other implications for history.

As soon as bananas appear in the archaeological record, we know we have contact between Africa and Southeast Asia.

It would appear now that this contact occurred much earlier than previously thought.

Although...now here's where the uncertainty comes in...we don't really have any solid evidence of trade between the peoples of these two regions that long ago. 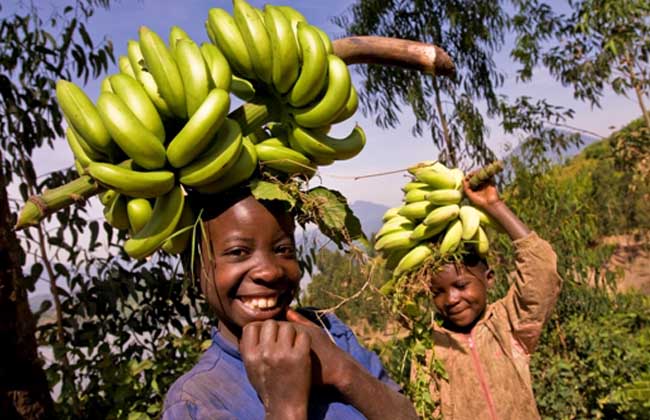 Presumably, if people were bringing bananas to Africa, they'd also be bringing other things too: pottery, tools...all sorts of objects made for trade or daily use.

But any such evidence is missing from the archaeological record.

The early appearance of bananas also suggests that agriculture began in this part of Africa earlier than scientists imagined.

You see, bananas, at least the edible kind, can't grow without human intervention.

They have to be cultivated. People need to plant them and care for them.

So if bananas were present in Uganda 5,000 years ago, we would have to assume that someone planted them.

But, there are questions about this too.

We know that bananas can be a staple food that can support large populations, as they did in Uganda in the more recent past.

If bananas were grown thousands of years ago, why don't we see evidence of large populations thriving in the area earlier? So, we are left with this mystery.

We have what appears to be strong biological evidence that bananas were being cultivated in Uganda as early as 5,000 years ago.

But we are missing other kinds of evidence that would conclusively prove that this is so. Clearly, more research needs to be done.

Perhaps by some young scholars from this university? At least give it some thought.