Listen to part of a lecture in an environmental science class.

Professor: I'd like to continue with the topic of managing water resources, but I want to focus on a particular case.

Uh, um, an example of water management that's made us reconsider the methods we use when we make these decisions.

So let's look at what's happening in the Colorado River basin.

The Colorado River basin is a region in the Southwest United States. 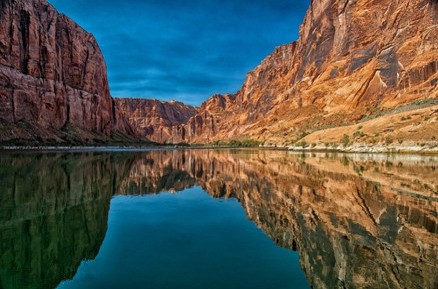 And as you can imagine, as the populations of these states began to grow, it became clear that a system to distribute, uh, to make sure each state got its fair share of water...some kind of system had to be created.

And in 1922, a water-sharing agreement was made. Elizabeth, you have a question?

Student: Well, how exactly do you figure out how to share a river?

I mean, you can't...like cut it up into pieces.

And that's trying to figure out how much water on average flows through the river each year.

Now, researchers had started gathering data on water flow back in the late 1890s using instruments they placed in the river.

When the 1922 water-sharing agreement was made, there were about twenty years of data on water flow available.

The average annual flow was calculated.

And, well, the agreement was based on that calculation.

The same basic agreement is in effect today.

Student: Wait! That was all the data they had?

And they based their decision on that?

Professor: Yes. And we'll why that was a bad decision in a moment.

OK. As decades passed, it became clear that measuring river flow was much more complicated than we had thought.

And this wasn't taken into consideration when the 1922 agreement was made.

In the 1970s, the population of the area was rising while the amount of water flowing through the river seemed to be falling.

A hundred years of recorded data to look at?

That's still a pretty short time for an ancient river.

To get more data, we looked at a different source—a source that was able to tell us about hundreds of years of the river's history—tree rings.