Listen to part of a lecture in a biology class.

Professor: Ways in which animals adapt to their environment are often quite ingenious actually.

And as an example of this, let me tell you about a fish, a group of fish known as the Notothenioids.

There's over 90 known species of Notothenioids and they inhabit both shallow and very deep waters, mostly around Antarctica.

Many are fairly small, though the largest species can weigh up to 150 kilograms. 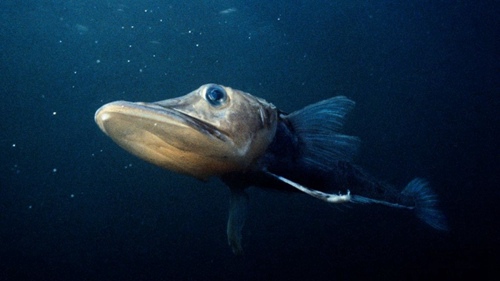 Notothenioids can be identified by their large eyes, which are covered by a thick insulating layer of clear tissue.

This tissue protects their eyes from freezing.

So it can get a lot colder for fish in an ocean, say, than in a river or lake.

So this means that the ocean waters around Antarctica are cold enough to freeze most types of fish, but Notothenioids don't freeze.

In fact, they thrive.

They account for some 95% of all fish in the southern ocean, the ocean that surrounds Antarctica.

So, how unusual is that?

To have a single family of fish dominating an entire ocean.

Coral reefs, for example, support over 4000 types of fish, along with sponges, crustaceans, and many other organisms.

So, exactly when and how did the Notothenioids come to dominate the southern ocean?

Well, around 30 million years ago, the waters around Antarctica were a lot warmer than they are today.

Um...at that time, Antarctica was connected to South America, which means that warm air from the north could flow southward and heat up the Antarctica waters.

Because the water around Antarctica then was relatively warm, it supported many types of fish.

And we know this from fossil evidence.

But the 90 or so species of Notothenioids that exist today didn't exist at all back then.

In fact, only one ancestral Notothenioid species existed.

But somewhere between 5 million and 14 million years ago, two major changes took place.