Listen to part of a lecture in an art history class.

So last week we started talking about the painters and sculptors who were part of the art movement called Dada.

But I don't want you to think the ideas we introduced last time were limited to painting, sculpture, that sort of thing.

So today I want to move beyond the visual arts and talk a bit about Dada in the performing arts, in theater.

But let's start by reviewing what Dada is. OK?

As you will recall, Dada began in Switzerland, in the city of Zurich, in 1916.

The artists who studied it were reacting against traditional notions of beauty, of reason, of progress, which had been standards of western thought since the 18th century. 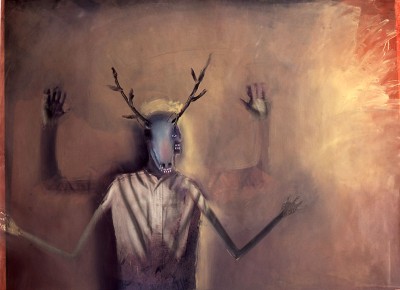 And well, I mean, the First World War was raging, so they didn't see much beauty, reason or progress in the world.

And if that's the way the world was, well, they wanted their art to reflect that.

So let's... let's review a couple of key ideas that were the backbone of Dada art.

First, the Dadaists wanted to completely reject the classical idea of art.

Great art involved reason, the logic, the beauty that the Dadaists wanted to overthrow.

So, well, you know, to a Dadaist, classical artwork was a reflection of outdated thinking!

That's why Dadaists created sculptures like the ones we saw last week.

Remember the stool with the bicycle wheel mounted on top?

I wouldn't exactly called that beautiful, would you?

But of course it wasn't meant to be.

That was the point!

OK. So another key Dada idea we talked about was the embracing of randomness. Right?

Uh... if life is random, said the Dadaists, why would we make art that has order and logic?

And so we have that collage we looked at, with an artist took different, you know, cut-out squares of colored paper, threw them onto the canvas, and wherever they landed, that was the composition of the work!

Another favorite of the Dadaists was something called chance poetry.

A chance poet would pull words out of a hat and that would be... that would make up the poem!

And this idea of chance and randomness was a key element of Dadaism because the whole world seemed so random to them.