So now let's take a look at how Dadaist ideas represented to audiences in highly unconventional... well... I am not even sure how to categorize these theatrical events.

I suppose you just have to call them shows.

These shows started in Zurich in a place called the Cabaret Voltaire.

The rejection of classical western art, well, you see this in the nature of what took place at the Cabaret Voltaire.

They didn't put on plays or operas there.

What they did was throw out all conventions. 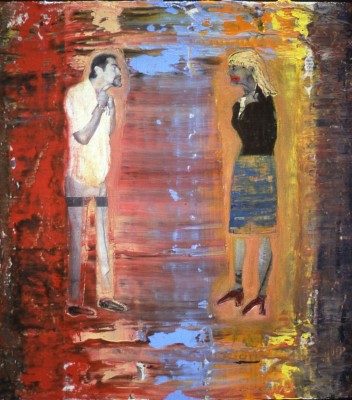 They mixed everything and anything together.

They would... it might start with somebody reading a poem.

The performers at the Cabaret Voltaire would also get the audience involved, which was extremely unusual.

Think about a traditional play.

The actors act as if there is no one watching, right?

Well, at the Cabaret Voltaire, audience members could get up on stage and dance, or chant, or shout and sing from their seats.

And every night would be different, because there would be a different audience and a different set of acts and displays.

So all these could get pretty chaotic.

Think about it: poetry, paintings, music, dance... all on the same stage and often at the same time!

This is what the Dadaists had in mind.

When they set out to make art that reflected their own idea of reality, it didn't make sense.

But why should it? !

What is the main purpose of the lecture?

Why does the professor mention a stool with a bicycle wheel mounted on top?

According to the professor, why did some Dadaist write poetry by pulling words out of a hat?

What does the professor identify as aspects of traditional play?

According to the professor, what contributed to the chaotic nature of the performances at the Cabaret Voltaire?

Why does the professor say this: I suppose you just have to call them shows.