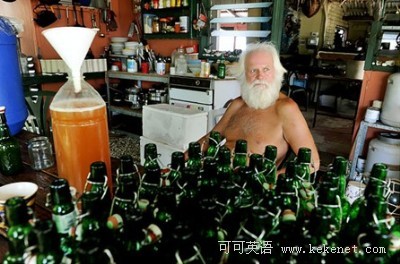 An entrepreneur who said he has worked in a number of fields—including mineral exploration, food services and toys—he had suffered a series of financial losses and divorce when a girlfriend suggested escaping to an island in the early 1990s. “I just wanted the idea of a less stressful life,” he said. “I figured there had to be something better than this out there.” Mr. Glasheen was living in Sydney at the time and found the island, an uninhabited national park, through a real estate agent. He and his girlfriend set up residence there, but she left after six months. “We had a baby, we had no hot water, we had no washing machine,” he said. “Things are not easy here for a woman.”

Mr. Glasheen had built a farm on the island. Along with native foods like 26)lemon grass and 27)capers, he raises 28)bok choy, tomatoes and corn. He also makes home-brewed beer that he trades for 29)prawns from30)trawlers that sometimes 31)anchor off shore.

There is an inherent conflict between the peace of total solitude and the pleasures of companionship, he admitted. “It’s literally like living in heaven on Earth,” he said of the island, but “I guess I could say I’m desperately lonely sometimes.”