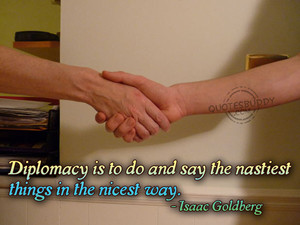 INTRO: The aftermath of the collision between an American spy plane and a Chinese fighter jet gives Wordmasters Avi Arditti and Rosanne Skirble an opportunity to examine the language of diplomacy.

"Since there was not a productive discussion of the return of our airplane at the meeting today, we want to be reassured that they are willing to do that before we continue these discussions."

AA: That's State Department spokesman Richard Boucher after negotiations got off to a rough start in Beijing Wednesday. The Navy intelligence-gathering plane made an emergency landing at an air base on Hainan Island on April first.

AA: Paul Sharp is a British-born political scientist at the University of Minnesota. He says the wording of the statement from U-S diplomats took on great importance.

"Both sides were saying the other had done something wrong, and one side had made an apology the condition of cooperating — specifically returning the aircraft and the aircrew. And what the diplomats on both sides did was look for a formula that would somehow satisfy both sides, that would have enough nuance of apology for the Chinese, in this case, and yet would not be an apology from the point of view of the United States."

RS: Professor Paul Sharp says precision of language was of more concern in what he calls the "good old days of diplomacy."

"In the past, precision of language was for straightforward communication on substantial matters — we've got to know what we've agreed to — whereas I think in this recent episode the question of spin and how this is to be presented by both governments to their domestic audiences and to their allies and friends became very important."

AA: Mr. Sharp says the incident has also underlined the importance of the differences between what researchers call high-context and low-context cultures.

PAUL SHARP: "In the low-context culture, you focus specifically on the words and the content of the words, whereas in high-context cultures you pay a great deal of attention to the circumstances in which they are being uttered and by whom. Raymond Cohen at the Hebrew University has done some very interesting work on this and, for example, he points to the clash between American — and, indeed, Western — negotiators and Arab negotiators on how you bargain. For Americans, the idea is very much that you — to use their phrase, 'cut to the chase.' 'Let's talk about what's negotiable, what we're prepared to offer up in return for something else.'

And the argument is that in a high-context culture, for example like the Arabs and indeed the Chinese, that is bringing the language of the 'suuk' or the marketplace, or the second-hand car lot, to issues of high principle that should not be dealt with in terms of this sort of haggling."

SHARP: "I think it's not so much that we are all trapped in our cultural prisons and therefore are unable to reach agreement with each other. Because very often countries, when they want to reach agreement, find these sorts of obstacles no problem at all and they work their way through. There's two dangers. One is that international politics, despite what our governments say, is still power politics. So countries are maneuvering for advantage over each other and will exploit language nuances at times to gain advantage. But, I would say more importantly than that, the real danger is when countries think they have reached an agreement. They go away thinking that they've agreed to something, they think that the other side has the same conception of the agreement, and then there's regrets down the line."

AA: Professor Sharp says language can be used as a bargaining chip among negotiators. The American crew was released shortly after "sorry" became "very sorry" in the statement of regret from the United States.

"So at some point in the negotiation, where both sides are thinking 'well, this is about as much as we can get out of this,' 'very' becomes a chip that works: 'You throw that into the pot, and we'll go for it.'"

AA: Paul Sharp at the University of Minnesota in Duluth.

RS: If you have questions about American English, send them to Avi and me. Our address is VOA Wordmaster, Washington DC 20237 USA or send e-mail to word@voanews.com.

AA: Until next week, with Rosanne Skirble, I'm Avi Arditti.

首先，我们要了解外交的本质，如果“Both sides were saying the other had done something wrong, and one side had made an apology the condition of cooperating.” 那么，“And what the diplomats on both sides did was look for a formula that would somehow satisfy both sides, that would have enough nuance of apology for the Chinese, in this case, and yet would not be an apology from the point of view of the United States.”

美国人往往开门见山，“Let's talk about what's negotiable, what we're prepared to offer up in return for something else.”，这就是“cut to the chase”，属于低语境。阿拉伯人 ，中国人恰恰相反，属于高语境。