JUDY WOODRUFF: Already, the 2016 spotlight has shifted to the next two major campaign battlegrounds, New York and Pennsylvania. Ted Cruz, fresh off his win in Wisconsin's Republican primary, paid a visit today to the Big Apple. There, he was forced to defend his criticism earlier in this campaign of front-runner Donald Trump's what he called New York values.

Cruz pointed to what one Hispanic pastor told him today about what's wrong about New York politics and the values that drive them.

SEN. TED CRUZ (R-TX), Republican Presidential Candidate: We fight them every day in our country. We fight them. They're the values that led, for example, Mayor Bill de Blasio, liberal Democrat, of getting elected there.

One of the first things he did was try to shut down charter schools in Harlem, because he is captive to the union bosses who control him, so one of his first actions was to try to throw young African-American and Hispanic kids out of the schools that were giving them hope and giving them a lifeline.

Those are the values. It's the values of the liberal Democratic politicians that have been hammering the people of New York for a long time. 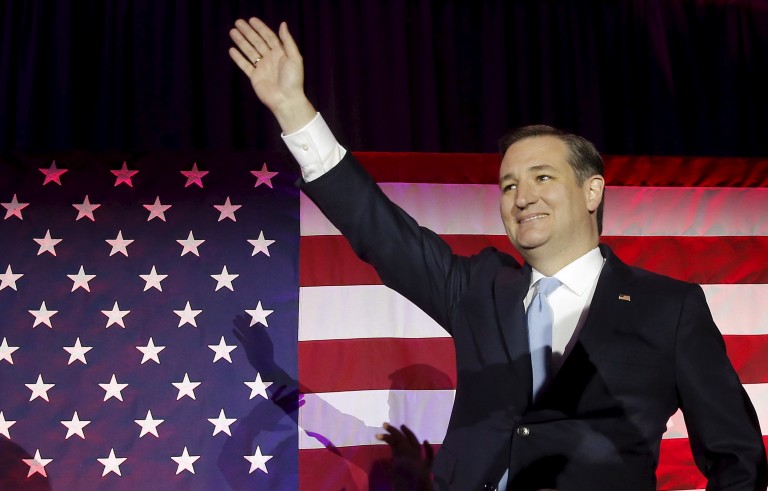 JUDY WOODRUFF: Donald Trump, for his part, has a rally scheduled this evening in Long Island, while Ohio Governor John Kasich was off the trail today.

On the Democratic side, Bernie Sanders is moving on to Pennsylvania with his Wisconsin win last night under his belt. But the Democratic front-runner once again took aim at Sanders' ability to turn his rhetoric into reality.

Here's what Hillary Clinton said today at an AFL-CIO convention in Philadelphia.

HILLARY CLINTON (D), Democratic Presidential Candidate: I am concerned that some of his ideas just won't work because the numbers don't add up. Others won't even pass Congress, or they rely on Republican governors suddenly having a conversion experience and becoming progressive, while, in a number of important areas, he doesn't have a plan at all.

JUDY WOODRUFF: To dig into last night's results in Wisconsin and perhaps tell us what it could mean for the road ahead, we are joined by Ron Brownstein, who writes for "The Atlantic" and "National Journal," specializing in the demographics of the nation's politics, and Dante Chinni. He's director of the American Communities Project, a county-by-county look at the U.S. electorate. He is also a politics reporter for The Wall Street Journal.

And we welcome you both to the program.

JUDY WOODRUFF: Good to see you.

So, let's talk about — a little bit about breaking down that vote yesterday, Ron, in Wisconsin. What did you see from what voters did, how they voted that tells us anything about what's happening?

On the Democratic side, we saw Bernie Sanders strong where he has been strong, dominant among young people, and surprisingly competitive among working-class white voters in the Midwest. He's now won them in every state, except for Ohio, where the two of them ran even.

So he has shown that he can continue to be very strong in states that are predominantly white and where the share of vote cast by Democrats is lower. Hillary Clinton maintained her strength among African-American voters, which is critical going into the big diverse battlegrounds to come, New York, Pennsylvania, California, New Jersey.

On the Republican side, the patterns broke substantially. Ted Cruz did better among voters, particularly those who are not evangelicals, than he's done before. The question will be whether that was a one-time anomaly or that's a new pattern in the race.

JUDY WOODRUFF: What do you see, Dante, when you look at Wisconsin?

We had Marco Rubio. He went away. We had some earlier folks. We had Jeb Bush. We even had Scott Walker. And it really did look — last night, it looked like the establishment said, OK, we're going on all in Ted Cruz, we're going, which is remarkable. To say that, a year ago, that Ted Cruz has become the candidate of the establishment, that honestly…

JUDY WOODRUFF: But that you're looking at a lot of endorsements. And you're right. It does — at this point, it looks like that's where they're coalescing.

Well, let's — we have some graphics here, Ron. Let's talk about something you say you have seen in really all the primaries so far. And you just referred to it that helps us understand the Republican vote. And it has to do with on the Republican side who is winning the white college grads and non-college grads.

So, look, what Donald Trump has done is fracture the Republican Party along a new line of division. Now, in the past, Republican races have been defined mostly by ideology and religious affiliation. You had one candidate who was more moderate, somewhat conservative voters, and also non-evangelicals, another candidate who tends to be more conservative and evangelicals.

Trump has replaced that with a new divide along the lines of education. As you look at that map, he has won voters who are white college graduates in only eight of the 21 states. In the cumulative exit polls, he's carried about a third of them. He has been dominant, though, Judy, among those non-college white voters in the Republican primary. He's won them.

JUDY WOODRUFF: The next graphic.

And one of the things that was significant last night, he's won about 45 percent of them. So, in most states, the pattern has been Trump loses the college voters usually pretty narrowly, and wins the non-college voters by big margins. Last night in Wisconsin, we saw something very different.

We saw him lose the college voters by a very big margin, almost 20 points. And he also lost the non-college white voters, only the fourth time he's done that in the 21 sees with exit polls.

That was one of the key questions. Is that, again, a one-time confluence of events that makes Wisconsin unique, or is this a new pattern? By the way, new polling out tonight in New York suggests it may have been a one-time event, at least as compared to his home state.

It's got to be proven that Cruz can sustain the advantages we saw in Wisconsin. But there's no question that Trump has upended the usual order in the Republican primary by building his blue-collar coalition that transcends the usual geographic divides.

JUDY WOODRUFF: Well, we know Wisconsin voters were bombarded with this campaign for the last few weeks. And now New York voters are about to experience the same thing.

DANTE CHINNI: Well, the one thing I have noticed looking at the data throughout the election, and even going in, is that Republicans need to win the suburbs to win the general election.

It's very important to them. They have been losing in the suburbs for a long time. In the last election, say, in 2008 — 2012 — sorry — Barack Obama won these suburban places by about 16 points in the breakdown that I used for the American Communities Project.

I looked at head-to-head data between Hillary Clinton and Donald Trump. She's winning in those places now by like 32 points. She's doubled the advantage. And we're seeing in — what we're seeing in these primaries is Trump cannot win in these places, and it revealed itself again last night.

You look at that map. Where does he win? He wins Milwaukee, he wins Waukesha, Washington. He wins over to Dane, which is where Madison is.

JUDY WOODRUFF: This is the county, Dane County.

And then he wins up a little bit around Green Bay, Appleton. But when you get up in those rural areas, that's all Trump.

JUDY WOODRUFF: And there are places where suburbs become almost rural.

And that's been — those places have been fairly good for Republicans in the past. And even when I look at the breakdown, the head-to-head numbers with Trump and Hillary Clinton, he still holds down the Republican edge in those places, but he's way down. He doesn't have the edge that, say, Mitt Romney had.

RON BROWNSTEIN: There has been some commentary, even from Trump himself, that he is winning because he is transforming the Republican electorate. That's not really happening.

If you look at the share of the vote cast by Republicans, it is basically the same as it was in 2012. There has not been this big upsurge of Democrats and independents. And Trump has won Republicans in every state that he has won except Missouri.

What he has done, Judy, is taken the existing coalition and divide it in a new way. He has basically achieved what someone like Pat Buchanan or Rick Santorum tried and failed to do. He's consolidated this blue-collar half of the party in a way that no one has done before.

JUDY WOODRUFF: All right, just quickly, we want to turn to the Democrats here, because, Ron, you have also looked at that, and frankly how it is divided by race, how Hillary Clinton and Bernie Sanders have divided the white voters. And we have got a graphic on that.

But he has expanded beyond that. He is now competitive among those blue-collar whites. He has won all white voters in every state outside of the South except for Ohio and Iowa. She has dominated among white voters in the South. And that's allowed him to compete far beyond the kind of wine track states like an Oregon, say, or a Vermont and New Hampshire.

RON BROWNSTEIN: And until he breaks that pattern, that is his task in the remaining contests, New York, Pennsylvania, California, and New Jersey.

DANTE CHINNI: The one thing you also see with Bernie Sanders that is interesting, while he's winning these rural — he's winning rural white places.

There are aspects to Bernie. We all think about him as, yes, he's the college kids, crazy Professor Sanders. Go vote for him.

DANTE CHINNI: But that's not really everything that's going on with him.

JUDY WOODRUFF: But he still is, Ron, a significant number of delegates behind Hillary Clinton.

And that is because, if you look forward, you see where the challenge is. He's a good candidate for Kentucky, for West Virginia, for South Dakota, for Oregon. But on the Democratic side, the big states that award the big trove of delegate delegates are all diverse.

And Sanders' campaign recognizes that he has — he has obviously advanced far from where he started. But the hill that he has to get over to truly challenge her is to crack the diversity of the Democratic Party. Without that, he can't win a place like California or New Jersey.

JUDY WOODRUFF: All right, we are going to have to leave it there. It is all fascinating, and New York two weeks from yesterday.

JUDY WOODRUFF: Ron Brownstein, Dante Chinni, we thank you both.

RON BROWNSTEIN: Thanks for having us.