It follows similar attacks across Europe, and, last weekend, in Charlottesville, Virginia.

For more, we turn to Lorenzo Vidino, who leads the Program on Extremism at George Washington University.

I think the last time Spain was hit was in 2004, when we had the Madrid bombings. But since the mobilization in Europe has been ISIS-linked, Spain has not been touched by the same levels of radicalization and mobilization and by attacks as some of the Central, Northern European countries have.

HARI SREENIVASAN: Why is that?

LORENZO VIDINO: It's for a variety of reasons, but mostly mobilization in Europe for ISIS has been a second-generation phenomenon.

And the Southern European countries, like Spain, like Italy, do not have a large number of second-generation Muslims, people who are born and raised in those countries. So, I'm not saying that Spain has not been touched by the phenomenon of radicalization.

We have problems. If you are looking at the two enclaves, Spanish enclaves in Moroccan territory, south of Melilla, where apparently at least one of the attackers came from, those areas have had a lot of problems, but mainland Spain has not been hit with the same intensity in terms of numbers of people radicalized, in terms of foreign fighters, as, let's say, France, or U.K., or Germany or Belgium. 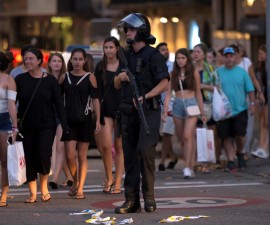 HARI SREENIVASAN: How good are the security systems in place in Spain where the individuals that might have been behind this, were they on the radar? Do they have a radar keeping track?

LORENZO VIDINO: Since 2004, Spain has increased its counterterrorism capabilities.

Obviously, as any other law enforcement or intelligence throughout Europe or in the United States as well, they can't intercept everything, they can't monitor everything. They have disrupted quite a few plots over the last few years. There have been hundreds of people been arrested, this, again, in a country that has not seen the levels of mobilization of other European countries.

In Barcelona itself, a plot was thwarted last year, pretty sophisticated one. Having said that, obviously, it's the experience of everybody from Europe to the United States that something always falls through the cracks.

I think we will see over the next few hours whether those individuals who carried out the attack are known to law enforcement, as it is often the case, or not known, what happened, and I think that's something we will pull have to see.

HARI SREENIVASAN: This particular area is very popular with tourists. But the method of attack now, using a car, using a van, using anything, it's almost unstoppable.

LORENZO VIDINO: It is.

I think you have seen a lot of European countries have put barriers in pedestrian areas. To be honest, I'm a bit surprised that the city of Barcelona or Spanish authorities have not done that in an area that is hugely popular with tourists.

I think Barcelona is one of the top three destinations for tourists. And Las Ramblas is really the main pedestrian area. So, any time of the day or night, it is flooded with tourists.

And the fact that a van could go in, I think it's probably something that will need to be discussed in the aftermath of the attack. But, obviously, you can't stop everything. You can't block city centers. You can't close down places like arenas. We had an attack in Manchester. Or any kind of social life.

So, obviously, as any country, and I think we have seen that in the States as well, certain precautions have been taken, but you cannot stop life. You cannot militarize our cities.

HARI SREENIVASAN: What about the coordination between Interpol, other European countries? Are they sharing information fast enough between countries to say, you might have a threat here, here are three or four people that just crossed our border into yours?

LORENZO VIDINO: It has gotten much better compared to a few years back. It is not perfect.

Interpol does a good job. But there are a lot of limitations in what can be done. And I think you still have political jealousies, diffidence, even in some cases within individual countries. I think, to some degree, that would apply to Spain.

I'm not saying this is the case right now, but there are political tensions between Catalonia, which wants to be an independent country, and it's an autonomous region inside Spain, and the Spanish central government. And, sometimes, that's has repercussions also on counterintelligence and intelligence-sharing. Sharing information in real time is problematic at the European level, at the international level.

HARI SREENIVASAN: All right, Lorenzo Vidino, who leads the Program on Extremism at George Washington University, thanks so much.

HARI SREENIVASAN:In a series of tweets, President Trump condemned the attack and offered help to the people of Spain. He also raised again a claim that the U.S. Army used bullets dipped in pig's blood to quell Muslim rebels in the Philippines years ago. The story has been widely debunked.