Two Swedish design students have invented a totally new kind of bicycle helmet. People are saying it's invisible because you cannot see it on a cyclist's head. The "invisible" helmet is really a kind of airbag. It is inside a large collar. People wear it around their neck like a scarf. When the cyclist falls off his/her bike, the collar quickly fills with gas and an airbag surrounds the head. The two students, Anna Haupt and Terese Alstin, wanted to change the way people cycle. They said: "Bicycle helmets have always been the same. They're so bulky, like a hard mushroom on your head." They called their new invention the Huvding. The pair said it looks so fashionable that "people would be happy to wear it". 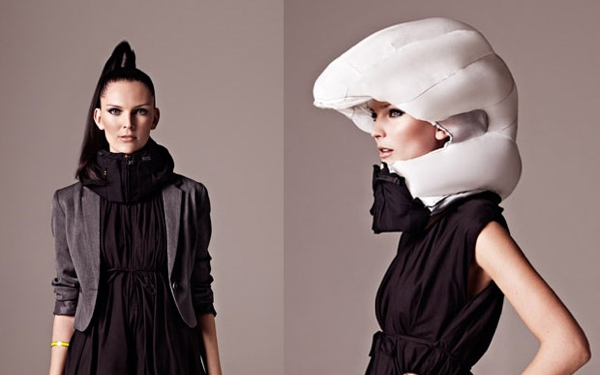 The inventors started research and development on the Huvding in 2005. They examined thousands of cycling accidents. They wanted to find out how to make the safest helmet. They then teamed up with a Swedish airbag company called Alva. Today, the Huvding company has a staff of 17 employees. They hope their helmet will change how people all over the world cycle. In their video, Haupt and Alstin said: "Cars are so yesterday. Bikes are the future." They also said their invention would make them millionaires. People can only buy the Huvding helmet online in Europe. It sells for around $530. The company did not say when it would be available in the rest of the world.